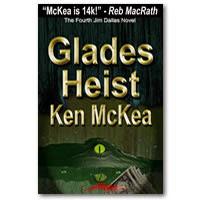 
Jim Dallas wanted to turn the case down. A drinking husband who hasn't come home in a while? Not his cup of tea. Then a sneak attack and the theft of his beloved old truck change his mind. Very quickly his search for a wandering man involves his friend Sam Lyons and leads Jim into a swamp of danger. Before he wades through it, he will have to deal with a new woman in his life, an old robbery, more than a million dollars in missing stolen loot, ravenous alligators . . . and a cold-blooded killer more ruthless than any he's ever faced. Glades Heist is the latest in the series of Florida thrillers featuring the hard-edged, complex Jim Dallas. Don't miss it!