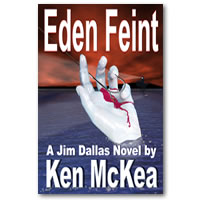 The third book in the Jim Dallas series has hit Amazon – and perhaps soon your Kindle, too?


The law had Adam Stowers dead to rights - but they wanted him dead, period. Jim Dallas and Sam Lyons venture into hostile territory when they attempt to prove that Stowers did not murder his wife, despite his conviction and subsequent life sentence. They discover resistance, corruption, and long-forgotten crimes that threaten to overwhelm them.

Before her death, Summer Stowers had dreamed of creating a resort on the Florida coast she would call Eden. She hadn't counted on the deadly serpent in human form who would stop at nothing - not even murder - to prevent her.