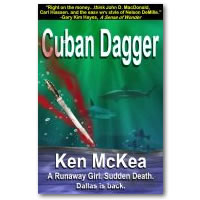 Brad Strickland announced via Twitter that the second Jim Dallas adventures – Cuban Dagger – is now available through your Kindle!


Jim Dallas knew that runaway-daughter cases seldom end happily, but the Hamptons were frantic. Their daughter Judy had vanished in Aruba while celebrating her eighteenth birthday...and when Dallas searched for her, the quest led him into unimaginable evil, unforgivable crimes, and unthinkable betrayal.