To Stand Beneath the Sun 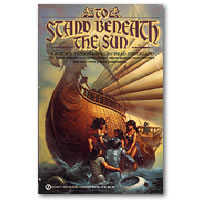 April 1, 1986: We wanted to pause our Bellairsian endeavors to note the 25th anniversary of the publication of To Stand Beneath the Sun, the debut novel of author Brad Strickland.


Released April 1, 1986 by Signet, the story tells of spaceman Tom Perion, who finds himself marooned on a planet where women are the rulers and men are second-class citizens:


A planet where women outnumber men 10 to one, where men are woshipped as Lords, but women still rule the planet. A ship called the "Sailing Star" is in a decaying orbit around the planet. From the Sailing Star falls a pod containing Tom Perion, a strange man who speaks the "High" tongue understood only by the priestesses of Kalea. What is his origin? He claims to come from a ship called "Galileo", in which dozens of other humans are still in stasis. Can a man get the women rulers of Kalea to believe him in time to save the inhabitants of Galileo from a fiery plunge to the surface of Kalea? 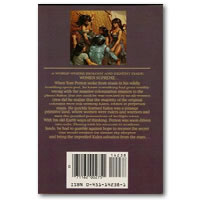 
When Tom Perion woke from stasis in his wildly tumbling space pod, he knew something had gone terribly wrong with the massive colonization mission to the plant Kalea. But not until he was rescued by an all-women crew did he realize that the majority of the original colonists were still orbiting Kalea, locked in perpetual stasis. He quickly learned Kalea was a strange primitive land, where women were rulers and warriors and men the guarded possessions of multiple wives. With his old-Earth ways of thinking, Perion was soon driven into exile. Fleeing with his rescuers to to northern lands, he had to gamble against hope to recover the secret that would awaken the distant sky sleepers and bring the imperiled Kalea salvation from the stars. 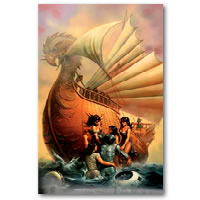 Noted SF artist Ken Kelly created the cover illustration – found on his website and titled Marooned – and features a spaceman pulled from his pod by four brunettes of the science-fiction scantily-clad stock, all off the port side of a massive sailing ship whose sails are filled with wind.  Or something like that.

Email ThisBlogThis!Share to TwitterShare to FacebookShare to Pinterest
Labels: To Stand Beneath the Sun