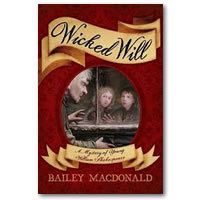 Bailey MacDonald’s debut book – Wicked Will: A Mystery of Young William Shakespeare – will be published by Aladdin on June 23, 2009:


When some wandering actors stroll into his home town of Stratford to perform their plays, Will Shakespeare thinks that he is going to have a lot of fun. He doesn't count on someone murdering Edmund Speight, an ill-tempered old farmer. Nor is he prepared when one of the actors, young Tom Pryne, needs Will's help because Tom's uncle has been falsely accused of the murder!

MacDonald is a professional actress and playwright who lives near Atlanta, Georgia and when she is not writing, she performs under a different name in a theater group in that city.